I love Half Life and I’ve always wanted to make a Gravity Gun, but there wasn’t really a way I could think of making one, short of working for DARPA or something – then the other month I saw this video.

And I was like “Fascinating! I never suspected such things could be.” and imagined strapping the levitation unit onto the front of an orange Nerf Gun.

So that’s what I did.

You can also check this out over at my Hackster profile.

They’re waiting for you, Gordon. In the Test Chamberrr.

You can follow the instructions for constructing the levitator here.

The above instructions pretty much cover everything from circuit diagrams to testing the transducer polarities and to loading up the code onto the Arduino.

It took me about 6/7 hours of testing the polarity of the transducers (of which about 50% of the markings on them were incorrect), soldering everything up and then testing the rig. 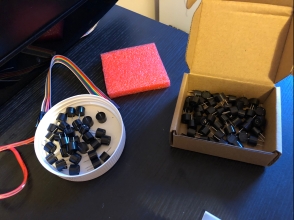 I then attached it to a Nerf Gun barrel attachment using a load of tie wraps. 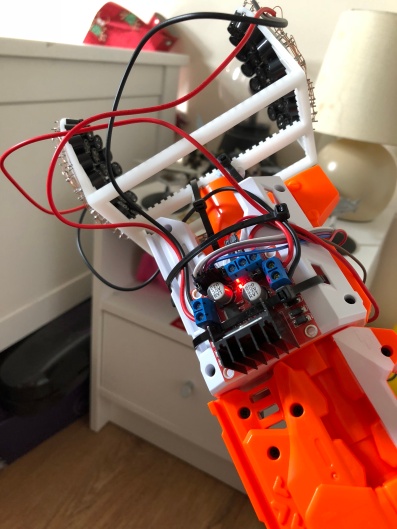 And there we go!

Wisely done, Mr. Freeman. I will see you up ahead.

As you can see the levitator will hold up small objects quite well. It was a bit tricky at first to get the right positioning but I think I’ve got it down now.

I haven’t worked up the courage to try levitating any liquids yet.

And here is a video with the Gravity Gun in action:

Put that down, it’s a prototype…

I was initially hoping that the air from the Nerf would be able to fire an object being held, but unfortunately dry-firing Nerf Guns don’t seem to produce that much air from the barrel. I may need another solution for this to really make it fire objects like in the game.

But, overall – its pretty sweet to see this thing in action and be able to pretend I’m Gordon Freeman for a bit. 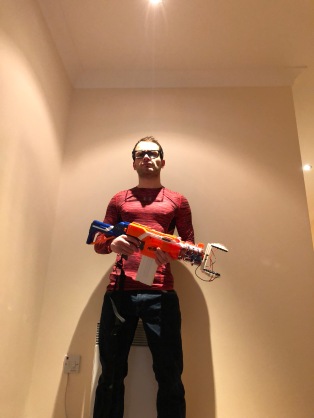 It seems as if you only just arrived.

This was a really fun project and I’m really glad you can buy the kit – as I don’t have 3D printer (yet) so I wouldn’t have been able to make it without purchasing from Makerfabs.

Let me know what you think – I’d love if someone with a 3D printer or a replica Gravity Gun could implement this into it for something really authentic looking.

As usual any suggestions are welcome for how I could improve this in terms of adding some firing functionality; I trust it will all make sense to you in the course of… well… I’m really not at liberty to say. In the meantime… this is where I get off.